Individuals with autism spectrum disorder (ASD) demonstrate superior performances on visuo-spatial tasks emphasizing local information processing; however, findings from studies involving hierarchical stimuli are inconsistent. Wide age ranges and group means complicate their interpretability. Children and adolescents with and without ASD completed a Navon task wherein they identified global and local stimuli composed of either consistent or inconsistent letters. Trajectories of reaction time in global and local conditions were similar within and between groups when consistent and inconsistent stimuli were considered together, but the effect of local-to-global interference was significantly higher in participants with than without ASD. Age was not a significant predictor of local-to-global interference, suggesting that this effect emerges in childhood and persists throughout adolescence in ASD. 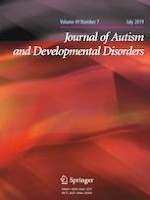 Mood Disorders in High-Functioning Autism: The Importance of Alexithymia and Emotional Regulation