Many visual illusions result from assumptions of our visual system that are based on its long-term adaptation to our visual environment. Thus, visual illusions provide the opportunity to identify and learn about these fundamental assumptions. In this paper, we investigate the Ponzo illusion. Although many previous studies researched visual processing of the Ponzo illusion, only very few considered temporal processing aspects. However, it is well known that our visual percept is modulated by temporal factors. First, we used the Ponzo illusion as prime in a response priming task to test whether it modulates subsequent responses to the longer (or shorter) of two target bars. Second, we used the same stimuli in a perceptual task to test whether the Ponzo illusion is effective for very short presentation times (12 ms). We observed considerable priming effects that were of similar magnitude as those of a control condition. Moreover, the variations in the priming effects as a function of prime-target stimulus-onset asynchrony were very similar to that of the control condition. However, when analyzing priming effects as a function of participants’ response speed, effects for the Ponzo illusion increased in slower responses. We conclude that although the illusion is established rapidly within the visual system, the full integration of context information is based on more time-consuming and later visual processing. 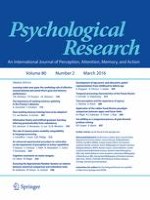 The role of sensory-motor modality compatibility in language processing

Time perception and the experience of agency