Structure Matters: The Role of Clique Hierarchy in the Relationship Between Adolescent Social Status and Aggression and Prosociality | mijn-bsl Skip to main content
TOOLBAR 1 2 3 4
ZOEKEN MENU 1 2 3 4

Peer cliques form an important context for the social development of adolescents. Although clique members are often similar in social status, also within cliques, status differences exist. How differences in social status between clique members are related to behaviors of its individual members is rather unknown. This study examined to what extent the relationship of individual social status (i.e., perceived popularity) with aggression and prosocial behavior depends on the level of internal clique hierarchy. The sample consists of 2674 adolescents (49.8 % boys), with a mean age of 14.02. We focused specifically on physical and relational aggression, and practical and emotional support, because these behaviors have shown to be of great importance for social relationships and social standing among adolescents. The internal status hierarchy of cliques was based on the variation in individual social status between clique members (i.e., clique hierarchization) and the structure of status scores within a clique (pyramid shape, inverted pyramid, or equal distribution of social status scores) (i.e., clique status structure). The results showed that differences in aggressive and prosocial behaviors were particularly moderated by clique status structure: aggression was stronger related to individual social status in (girls’) cliques where the clique status structure reflected an inverted pyramid with relatively more high status adolescents within the clique than low status peers, and prosocial behavior showed a significant relationship with individual social status, again predominantly in inverted pyramid structured (boys’ and girls’) cliques. Furthermore, these effects differed by types of gender cliques: the associations were found in same gender but not mixed-gender cliques. The findings stress the importance of taking into account internal clique characteristics when studying adolescent social status in relationship to aggression and prosociality. 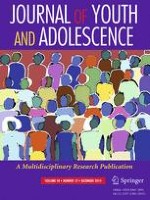 Jamshid Beheshti and Andrew Large (Eds.): The Information Behavior of a New Generation: Children and Teens in the 21st Century

The Social Values of Aggressive–Prosocial Youth