Is the Linguistic Content of Speech Less Salient than its Perceptual Features in Autism? | mijn-bsl Skip to main content
ZOEKEN MENU 1 2 3 4

Open-ended tasks are rarely used to investigate cognition in autism. No known studies have directly examined whether increased attention to the perceptual level of speech in autism might contribute to a reduced tendency to process language meaningfully. The present study investigated linguistic versus perceptual speech processing preferences. Children with autism and controls were tested on a quasi-open-format paradigm, in which speech stimuli contained competing linguistic and perceptual information, and could be processed at either level. Relative to controls, children with autism exhibited superior perceptual processing of speech. However, whilst their tendency to preferentially process linguistic rather than perceptual information was weaker than that of controls, it was nevertheless their primary processing mode. Implications for language acquisition in autism are discussed.
vorige artikel Helping and Cooperation in Children with Autism
volgende artikel A New Computerised Advanced Theory of Mind Measure for Children with Asperger Syndrome: The ATOMIC 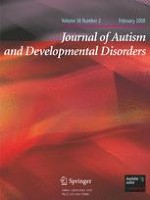 A Scale to Assist the Diagnosis of Autism and Asperger’s Disorder in Adults (RAADS): A Pilot Study

Are There Enhanced MBP Autoantibodies in Autism?