Neurofibromatosis type 1 (NF1) is an inherited neurocutaneous disorder associated with neurodevelopmental disorders including autism spectrum disorder (ASD). The frequency of ASD/NF1 co-occurrence has been subject to debate since the 1980s. This relationship was investigated in a large population-based sample of 8-year-old children identified with ASD (N = 12,271) by the Centers for Disease Control and Prevention’s Autism and Developmental Disabilities Monitoring (ADDM) Network. Twenty-two (1-in-558) children with ASD had diagnosed NF1, exceeding NF1 general population estimates by four to five fold. Children with ASD/NF1 versus ASD without NF1 were significantly less likely to receive a community-based ASD diagnosis (p = 0.04) and understand non-verbal communication (p = 0.001). These findings underscore the importance of including social-communication ability among relevant developmental concerns in children with NF1. 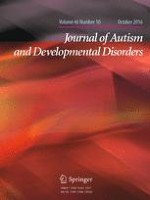 The Role of Attention in Somatosensory Processing: A Multi-trait, Multi-method Analysis

The Relationship Between the Childhood Autism Rating Scale: Second Edition and Clinical Diagnosis Utilizing the DSM-IV-TR and the DSM-5

Brief Report: The Effects of Equine-Assisted Activities on the Social Functioning in Children and Adolescents with Autism Spectrum Disorder