The results of the present study support the importance of mindfulness among children and adolescents and suggest that mindfulness is a helpful strategy for children and adolescents exposed to trauma. While more research is needed, the results suggest that mindfulness may be helpful to include in intervention for the psychological functioning of children following exposure to a hurricane.
vorige artikel Insurance-Reimbursable Mindfulness for Safety-Net Primary Care Patients: a Pilot Randomized Controlled Trial
volgende artikel Past Discrimination, Race-Related Vigilance, and Depressive Symptoms: the Moderating Role of Mindfulness 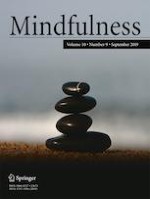 Mindfulness-Based Cognitive Therapy Versus Treatment as Usual in Adults with ADHD: a Trial-Based Economic Evaluation

Mixed Experiences of a Mindfulness-Informed Intervention: Voices from People with Intellectual Disabilities, Their Supporters, and Therapists

Past Discrimination, Race-Related Vigilance, and Depressive Symptoms: the Moderating Role of Mindfulness

Mindfulness Training Offered In-person and in a Virtual World—Weekly Self-reports of Stress, Energy, Pain, and Sleepiness among US Military Active Duty and Veteran Personnel