Experiences of excessive disgust have been implicated in several psychopathologies. Research, however, has rarely examined disgust and its role in psychosocial functioning from a developmental standpoint. This study examines the relationship between disgust expression in early life and subsequent adolescent psychosocial functioning. Data from 165 children were collected as part of a longitudinal study. Disgust propensity in infancy and childhood was assessed using a facial expressivity task and food aversion task, respectively. Adolescent psychosocial functioning was measured through several self-report measures. Results suggest that there exists a degree of consistency in disgust expression within the first year of life, and that childhood disgust propensity may be related to impairment in early adolescent psychosocial functioning. These findings highlight the potential importance of identifying early disgust expression as a marker for later psychopathology.
vorige artikel Adjunctive Parental Support Within Manualized Parent Training for Children with Autism Spectrum Disorder
volgende artikel Parental Reflective Functioning as a Moderator for the Relationship Between Maternal Depression and Child Internalizing and Externalizing Problems 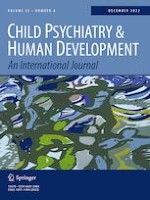 Alcohol, Marijuana and Other Illicit Drugs Use Throughout Adolescence: Co-occurring Courses and Preadolescent Risk-Factors

Depressive Symptoms Among Adolescents: Testing Vulnerability-Stress and Protective Models in the Context of COVID-19