Character development in adolescence is of growing interest among psychology researchers and educators, yet there is little consensus about how character should be defined and studied among developmental scientists. In particular, there is no fully developed framework for investigating the developmental relationships among different character strengths. This study examines the developmental relations between purpose and three other key character strengths that emerge during early adolescence: gratitude, compassion, and grit. We analyzed survey (n = 1005, 50.1% female, 24.1% Caucasian, 43.6% African American, 18.9% Hispanic, 11.9% Asian American) and interview (n = 98) data from a longitudinal study of character development among middle school students from the United States. Data were collected over the course of 2 years, with surveys conducted four times at 6-month intervals and interviews conducted twice at 12-month intervals. Data analyses showed small but significant correlations between purpose and each of the other three character strengths under investigation. Interview data revealed patterns in ways that adolescents acted on their purposeful aspirations; and interview analyses identified qualitative differences in expressions of gratitude and compassion between adolescents who were fully purposeful and those who were not. The findings suggest that character development can be better understood by investigating the multidirectional developmental relationships among different character strengths. 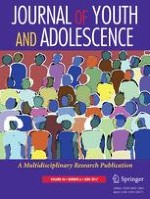 Longitudinal Relationships between Bullying and Moral Disengagement among Adolescents

Modeling Pathways of Character Development across the First Three Decades of Life: An Application of Integrative Data Analysis Techniques to Understanding the Development of Hopeful Future Expectations