Parents of toddlers with an older sibling with autism spectrum disorder (ASD; high risk, HR) and parents of low risk (LR) toddlers with typically-developing older siblings read a wordless picture book to their child at 22 and 28 months. Parents’ and toddlers’ internal state language (ISL) was coded; parents reported on toddlers’ use of ISL. Diagnostic assessments conducted at 36 months identified three groups: ASD, HR-noASD, LR. Parents did not differ in overall ISL, but parents of toddlers with later ASD attempted to elicit ISL from their children less than parents of LR toddlers. Toddlers increased their use of ISL with age, but those with ASD had lower scores and less age-related improvement than children in the other two groups. 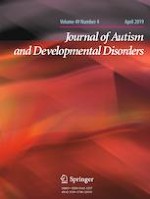 Health Disparities among Children with Autism Spectrum Disorders: Analysis of the National Survey of Children’s Health 2016