Passive testing of auditory function is an important objective in individuals with ASD due to known difficulties in understanding and/or following task instructions. In present study the habituation to standard tones following deviants and the auditory discriminative processes were examined in two conditions: electronic and human sounds, in a sample of 16 ASD children. ASD children presented a reduced habituation in the P1 component and a decrease in the amplitude of the mismatch negativity indicating a lower auditory discrimination with respect to controls. MMN amplitude was related to sensory sensitivity. Results suggest an increased activation to repeatedly auditory stimulus and a poor auditory discrimination, for both: electronic and human sounds with consequences on the impaired sensory behavior of ASD subjects. 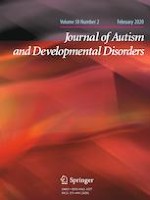 Ask the Editor: What is the Most Appropriate Way to Talk About Individuals with a Diagnosis of Autism?

Evaluating the Influence of Intraverbal Topography in Conditional Discrimination Procedures

Buspirone for the Treatment of Generalized Anxiety Disorder in Williams Syndrome: A Case Series

An On-Line Survey of University Students with Autism Spectrum Disorder in Australia and New Zealand: Characteristics, Support Satisfaction, and Advocacy