It is widely acknowledged that the brain anatomy of children and adolescents with autism spectrum disorder (ASD) shows a different developmental pattern then typical age-matched peers. There is however, a paucity of studies examining gray matter in mid and late adulthood in ASD. In this cross-sectional neuroimaging study, we, performed vertex-wise whole-brain and region-of-interest analyses of cortical volume, thickness, surface area, and gyrification index in 51 adults with and 49 without ASD, between 30 and 75 years. There was significant age-related volume loss and cortical thinning, but there were no group differences. The lack of significant anatomical differences between intellectual able individuals with and without ASD, suggests that ASD is not (strongly) related to gray matter morphology in mid and late adulthood. 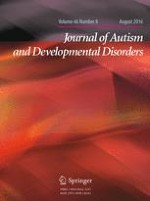 Sexuality and Autistic-Like Symptoms in Juvenile Sex Offenders: A Follow-Up After 8 Years