Autism is an extensively studied disorder in which the gender disparity in prevalence has received much attention. In contrast, only a few studies examine gender differences in symptomatology. This systematic review and meta-analysis of 22 peer reviewed original publications examines gender differences in the core triad of impairments in autism. Gender differences were transformed and concatenated using standardized mean differences, and analyses were stratified in five age categories (toddlerhood, preschool children, childhood, adolescence, young adulthood). Boys showed more repetitive and stereotyped behavior as from the age of six, but not below the age of six. Males and females did not differ in the domain of social behavior and communication. There is an underrepresentation of females with ASD an average to high intelligence. Females could present another autistic phenotype than males. As ASD is now defined according to the male phenotype this could imply that there is an ascertainment bias. More research is needed into the female phenotype of ASD with development of appropriate instruments to detect and ascertain them. 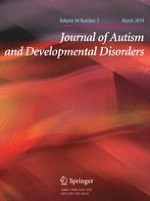