Twenty-five percent of children with ADHD also have an anxiety disorder (AD). As per Quay and in light of Barkley’s model, anxiety may have a protective effect on cognitive deficits and behaviors associated with ADHD. This study aimed to evaluate the effect of treating AD on cognitive deficits and behaviors associated with ADHD in children with both disorders. Twenty-four children with ADHD and AD were divided into two groups: treatment for AD, and wait list. Participants were assessed at pre-treatment, post-treatment, and 6-month follow-up with the ADIS-C, the CBCL, and neuropsychological measures. The results revealed a significant improvement in automatic response inhibition and flexibility, and a decrease in inattention/hyperactivity behaviors following the treatment for AD. No significant differences were observed in motor response inhibition, working memory, or attention deficits. The results do not seem to support Quay’s hypothesis: treating AD did not exacerbate cognitive deficits and behaviors associated with ADHD in our sample. 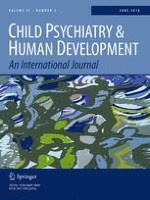 The Association Between Socioeconomic Disadvantage and Attention Deficit/Hyperactivity Disorder (ADHD): A Systematic Review

Treatments and Services Provided to Children Diagnosed with Bipolar Disorder

The Parent-Version of the Spence Children’s Anxiety Scale (SCAS-P) in Chinese and Italian Community Samples: Validation and Cross-Cultural Comparison

Depressed Adolescents’ Pupillary Response to Peer Acceptance and Rejection: The Role of Rumination