Accessory stimuli (AS) are task-irrelevant events (typically an auditory tone) that speed reaction time (RT). With two conditions (AS-present, AS-absent) it is unclear whether AS-presence causes benefits or AS-absence causes costs, possibly due to the expectancy violations. The current study added a third condition where AS were absent in blocks and not expected (pure blocks); in other blocks, AS occurred with a probability of 0.5 (mixed blocks), allowing cost–benefit analysis comparing AS-absent RTs in pure and mixed blocks. Results demonstrated RTs were slower when AS were absent, regardless of whether the absence occurred in a mixed block or a pure block, suggesting AS do provide a benefit to RT. Additionally, AS-facilitation across the RT distribution was analysed using cumulative distribution frequencies and ex-Gaussian parameter estimation. Both provided converging evidence that AS-facilitation increases towards the slower end of the RT distribution. The implications for the utility of AS paradigms are discussed. 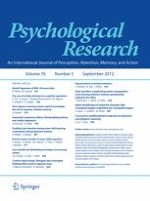