Different studies have shown that action–effect associations seem to enhance implicit learning of motor sequences. In a recent study (Haider et al., Conscious Cognit 26:145–161, 2014), we found indications that action–effect learning might play a special role in acquiring explicit knowledge within an implicit learning situation. The current study aims at directly manipulating the action–effect contingencies in a Serial Reaction Time Task and examining its impact on explicit sequence knowledge. For this purpose, we created a situation in which the participants’ responses led to a melodic tone sequence. For one group, these effect tones were contingently bound to the sequential responses and immediately followed the key press; for the second group, the tones were delayed by 400 ms. For a third group, the tones also followed the response immediately and resulted in the same melody but were not contingently bound to the responses. A fourth control group received no effect tones at all. Only the group that experienced contingent effect tones that directly followed the response showed an increase in explicit sequence knowledge. The results are discussed in terms of the multi-modal structure of action–effect associations and the ideomotor principle of action control. 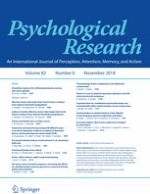 Destination memory: the relationship between memory and social cognition

The many routes of mental navigation: contrasting the effects of a detailed and gist retrieval approach on using and forming spatial representations

Visuomotor and motorvisual priming with different types of set-level congruency: evidence in support of ideomotor theory, and the planning and control model (PCM)