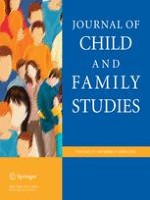 Mindful and Mutual Care for Individuals with Developmental Disabilities: A Systematic Literature Review

Searching for Danger: On the Link Between Worry and Threat-Related Confirmation Bias in Children

Kay Harris Kriegsman and Sara Palmer: Just One of the Kids: Raising a Resilient Family When One of Your Children Has a Physical Disability

Helping or Hovering? The Effects of Helicopter Parenting on College Students’ Well-Being

Child and Adolescent Resiliency Following a Residential Fire: The Role of Social Support and Ethnicity