The present study examined if a social positive illusory bias (PIB) is: a) simply a reflection of low adult-rated social acceptance, b) evident when children’s perceived social acceptance is measured implicitly, and c) directly relates to impaired executive functioning (EF). Participants were 8 to 12 year-old children (N = 120; 55 boys and 65 girls) with and without clinical symptoms of attention-deficit/hyperactivity disorder (ADHD). Ratings of the child’s social acceptance were obtained from an adult and the child using the Self-Perception Profile for Children (Harter 2012); social bias was calculated as the discrepancy between standardized adult- and child-ratings. Children also completed a reaction time measure to assess implicit perceptions of social acceptance and a battery of EF measures. Depression symptoms were assessed based on parent report. Group comparisons were focused on the presence or absence of social PIB rather than on ADHD diagnostic status. Relative to non-PIB children, those with a social PIB were significantly higher in self-reported social acceptance, but significantly lower on adult reports and implicit perceived social acceptance; these children also were significantly higher in depression symptoms. EF impairments were indirectly related to social PIB as a function of adult-rated social impairment. Results suggest that social PIB is not merely a reflection of low adult-ratings of social acceptance. However, the high explicit self-reports of social acceptance in children with a social PIB are not fully consistent with their implicit self-perceptions of social acceptance. Results are discussed in light of the self-protective and cognitive deficits hypotheses regarding the nature of social PIB.
vorige artikel Reading Comprehension in Boys with ADHD: The Mediating Roles of Working Memory and Orthographic Conversion
volgende artikel How Persistent is ADHD into Adulthood? Informant Report and Diagnostic Thresholds in a Female Sample 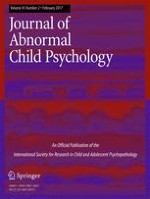 Sex Differences in the Prevalence of Oppositional Defiant Disorder During Middle Childhood: a Meta-Analysis

Prenatal Reflective Functioning and Development of Aggression in Infancy: the Roles of Maternal Intrusiveness and Sensitivity