In typical development there is a bias to orient visual attention to social information. Children with ASD do not reliably demonstrate this bias, and the role of attention orienting has not been well studied. We examined attention orienting via the inhibition of return (IOR) mechanism in a spatial cueing task using social-emotional cues; we studied 8- to 17-year-old children with ASD (n = 41) and typically developing controls (TDC) (n = 25). The ASD group exhibited a significantly stronger IOR effect than the TDC group, and the IOR effect correlated positively with social impairments but was unrelated to co-occurring ADHD or anxiety symptoms. The results provide evidence of an early altered attention mechanism that is associated with to core social deficits in ASD.
vorige artikel A Meta-analysis of the Wisconsin Card Sort Task in Autism
volgende artikel How Easy is it to Read the Minds of People with Autism Spectrum Disorder? 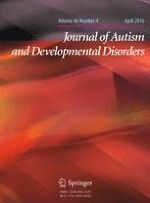 Emergency Department Use Among Adults with Autism Spectrum Disorders (ASD)

A Meta-analysis of the Wisconsin Card Sort Task in Autism

Persistent Angiogenesis in the Autism Brain: An Immunocytochemical Study of Postmortem Cortex, Brainstem and Cerebellum