The current study involved two groups of participants: Ninety-five participants with high functioning ASD between the ages of 19–43 years (M = 27.83, SD = 4.33) and one hundred and seventeen participants without ASD matched on mean chronological age (18–35 years of age; M = 27.60, SD = 4.74). Table 1 presents demographic information for both groups. Groups did not significantly differ with respect to the proportion of males versus females (62 % of the ASD group and 56.4 % of the non-ASD group were male), χ2 (1, N = 211) = .60, p = .44. Groups did not differ in visible minority status, education, or in self-reported sexual orientation (heterosexual vs. not heterosexual). The participants with ASD were recruited from community and private agencies that specifically support individuals with ASD. All reported being diagnosed with an ASD and met the clinical cut-off (score of >26) for ASD specified on the Autism Spectrum Quotient (AQ; Baron-Cohen et al. 2001). The AQ has high specificity for discriminating between individuals with ASD and neurotypical individuals (Woodbury-Smith et al. 2005). A number of other studies have used similar methods for support of confirmation of diagnosis (Clopper et al. 2012; Woodbury-Smith et al. 2005). With respect to self-reported diagnosis, 55 % (n = 52) of individuals reported that their primary diagnosis was Autism, 41 % (n = 39) reported Asperger syndrome, and 4 % (n = 4) reported a Pervasive Developmental Disorder. All comparison group participants scored below the ASD cutoff score on the AQ.
Table 1
Demographic information and comparisons by group

Participant demographics were obtained across both groups. Variables of interest included age, sex, visible minority status, sexual orientation, level of education, and ASD diagnosis. Among the sexual orientation category participants were asked to indicate if they identified as heterosexual, gay/lesbian, queer, two-spirited, bisexual, or other. Given the low rates of queer, two-spirited, bisexual, and other, the groups were collapsed for any demographic analyses into heterosexual and not heterosexual.

The AQ is a 50-item questionnaire designed to measure 5 different areas of functioning related to ASD: social skills, attention switching, attention to detail, communication, and imagination. Participants respond to each statement on a 4-point Likert scale, with answer categories: 1 = definitely agree; 2 = slightly agree; 3 = slightly disagree; 4 = definitely disagree. Scoring is dichotomized to indicate presence (score of 1) or absence (score of 0) of the symptom, resulting in scores from 0 to 50. Woodbury-Smith et al. (2005) reported good discriminative validity, high specificity, and good screening properties using a cut-off score of 26 (sensitivity 0.85–0.95, specificity 0.52–0.96), which was used in the current study. In the original validation studies of the AQ two-week test retest reliability scores were reported to be high (r = .70; Baron-Cohen et al. 2001). This scale exhibited good internal consistency in the current study (Cronbach’s alpha = .84).

The revised Knowledge of Sexual Health questionnaire (Walsh and Ward 2010; Weinstein et al. 2008) is a 37-item questionnaire measuring actual knowledge, knowledge sources, and self-efficacy. The 25 actual knowledge questions were used in the current study, related to STIs, contraception, and reproductive health (e.g. “Fertilization of the egg by the sperm (conception) occurs in the woman’s uterus”). Participants respond by indicating if a statement is True or False. Items are summed with one point for each correct response, with scores ranging 0 to 25. The revised measure has good internal consistency (Cronbach’s alpha = .77), and has been correlated with other sexual knowledge measures (DiClemente et al. 1989; Joseph et al. 1995). This scale also exhibited good internal consistency in the current study for the total score (Cronbach’s alpha = .86).

A 5-item questionnaire created by the authors was used to measure the participants’ perceptions of their sexual knowledge. The questions inquired about perceived knowledge of sexual health, contraception, and risky behavior. The questions were modeled after Ryan and colleagues' (2007) dichotomous one item measure that examined perception of condom knowledge (“You are quite knowledgeable on how to use a condom correctly” True/False). The Appendix includes a copy of the five items. True responses were scored as a 1 and summed, resulting in a score ranging from 0 to 5.

The participants with ASD were recruited through notices regarding the study distributed through community-based programs and organizations offering services to young adults with ASD across Canada and the United States. Notices were also posted on online ASD communities, and distributed by participants to others at their discretion. The comparison group was recruited through Qualtrics’ data system participant database. All participants completed their questionnaires on the online Qualtrics data system (www.​qualtrics.​com). All participants provided informed consent before accessing the online questionnaire. All participants lived in either the United States or Canada. Participants received a $20 gift card to an online retailer for their participation. The university ethics board approved this research.
In total, 500 people started the survey. Of this total sample 288 were dropped: 50 had <50 % of survey items completed, 56 completed the survey in <10 % of the expected time, 31 completed the survey with an inconsistent response pattern that suggested they were not truthful in their responses (e.g. selected all strongly agree throughout the survey despite the counterbalancing of items), and 151 (127 individuals with ASD and 24 comparison group peers) did not meet group criteria (e.g. in the ASD group the AQ scores were below the cut off and in the TD group the AQ scores were above the cut off).

Given that sex has been found to impact rates of sexual victimization, sex was entered as control variable in all analyses. A series of 2 (group) × 2 (sex) ANOVAs were calculated to compare sources of sexual knowledge, total perceived, and total actual knowledge between groups. Chi square analyses were calculated to compare the frequency of victimization for sexual contact, sexual coercion, attempted rape, and rape between ASD and non-ASD groups, after examining potential differences based on participant sex. Finally, in order to examine the hypothesis that the increased risk of sexual victimization for individuals with ASD would be mediated by their deficits in actual knowledge, perception of knowledge, and social sources of knowledge, a test of multiple mediation was run using Preacher and Hayes’ (2008) SPSS INDIRECT macro script for testing multiple mediator models with bootstrapping. The INDIRECT macro is most useful in estimating indirect effects when working with smaller sample sizes (e.g. under 400) or if the estimated mediated effect is small or modest (Preacher and Hayes 2004).

Finally we estimated the extent to which ASD status represented a risk factor for sexual victimization after taking into account the marked between group differences in perceived knowledge, actual knowledge, and sexual sources. We used multiple mediation, with perceived knowledge, actual knowledge, and total sources as potential mediators on the impact of ASD status (having an ASD vs. not) on predicting victimization (any experienced victimization vs. none). The multiple mediation analysis was run using an SPSS supplemental macro script for testing multiple mediator models with bootstrapping (see Preacher and Hayes 2008). Sex was entered as a control variable. Table 4 shows the unstandardized coefficients of each pathway, and the bootstrapping results based on 1,000 resamples.
As shown in Fig. 1 and Table 5, the total direct effect (path c) of ASD status was a significant predictor of victimization, before entering the mediator variables, z = −4.79, p < .001. The direction of estimates in the mediator pathways (path a) indicated that having an ASD was associated with less perceived knowledge, t = 2.79, p = .005, less actual knowledge, t = 7.87, p < .001, and fewer social sources, t = 4.32, p < .001. The total indirect effect from bootstrapping suggested the presence of mediation, CI −1.22 to −0.19, the result of the fact that less actual knowledge was associated with more victimization (path b), t = −2.98, p = .003. Social sources and perceived knowledge were not significant mediators in the overall model. After entering the mediators and the control variable, ASD status remained significant, z = −2.90, p = .004, suggesting that actual knowledge was a partial mediator.
Table 5
Multiple mediation analysis results for the mediating effect of perceived, actual, and sources of knowledge on the relationship between group and sexual victimization after controlling for sex
×

Previous research examining the levels of perceived and actual knowledge is relatively understudied within the ASD population. Our finding that individuals with ASD have lower levels of perceived knowledge is particularly novel as we know of no previous studies where self-reports of perceptions have been examined. Our finding that individuals with ASD have lower levels of actual knowledge is consistent with findings from parent report studies (Meister et al. 1994; Ruble and Dalrymple 1993) and self-report studies (e.g. knowledge of privacy issues, see Mehzabin and Stokes 2011; Stokes and Kaur 2005). These results indicate that individuals with ASD are lacking important sexual knowledge related to protecting themselves against STIs, sexually appropriate behaviors, and safe sexual practices. Having an understanding of risk factors, how to protect against infection and risky situations, and appropriate behaviors are important steps in being able to reduce the risk of victimization.

This study contributes to the literature by providing initial evidence for a link between sexual victimization and a lack of sexual knowledge in an ASD sample. Having low levels of sexual knowledge places individuals at risk above and beyond what can be accounted for by having an ASD alone. The link between knowledge and victimization has important clinical implications and the high rates of victimization found in the current study is a cause for concern. Given the negative impact that sexual victimization can have on an individual’s mental health and well-being, research is needed to determine best practices for proactive prevention, through teaching of sexually related information to children, adolescents, and adults with ASD. Further research is needed to examine the association between childhood victimization and adult victimization in this population as well as other individual and contextual factors that contribute to this increased risk for victimization.

The authors would like to thank all those who participated in our study. Stephanie Brown-Lavoie received funding from the Ontario Graduate Scholarship and the Ontario Mental Health Foundation Studentship. Michelle Viecili received funding from the Canadian Institutes for Health Research Frederick Banting and Charles Best Canada Graduate Scholarship. This research was supported by a New Investigator Fellowship from the Ontario Mental Health Foundation, and the Chair in Autism Spectrum Disorders Treatment and Care Research from the Canadian Institutes of Health Research in partnership with NeuroDevNet, Sinneave Family Foundation, CASDA, Autism Speaks Canada and Health Canada, to Dr. Weiss. Additional funding from the Spectrum of Hope Autism Foundation.

The authors declare that they have no conflict of interest.
Open AccessThis article is distributed under the terms of the Creative Commons Attribution License which permits any use, distribution, and reproduction in any medium, provided the original author(s) and the source are credited.
vorige artikel Relationships Between Feeding Problems, Behavioral Characteristics and Nutritional Quality in Children with ASD
volgende artikel Training Paraprofessionals to Improve Socialization in Students with ASD
insite
INHOUD
share
DELEN 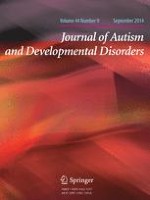 Relationships Between Feeding Problems, Behavioral Characteristics and Nutritional Quality in Children with ASD