This study aimed to examine the impact of Hurricane Katrina exposure on medication utilization among children with pre-existing anxiety and obsessive–compulsive and related disorders (OCRDs). Medicaid claims data from 2004 to 2006 were analyzed. Children with pre-existing anxiety/OCRDs were compared as a function of those living in a Louisiana disaster area, Louisiana non-disaster area, or Texas in terms of filled prescriptions and average days medication supply. This was further examined as a function of disorder/medication type. Prescriptions filled and average days medication supply were lower for those who resided in the disaster area of Louisiana relative to non-disaster zones in Texas (but not Louisiana). Children with OCD who lived in a disaster zone in Louisiana had 16.6 fewer days supply of antidepressants relative to youth in Texas. Similarly, children with PTSD who lived in a disaster zone in Louisiana had approximately 7 fewer days supply of stimulant medication relative to those who lived in Texas. Medication utilization was reduced for those youth directly exposed to Katrina relative to children in Texas, suggesting potential service disruption. Children with OCD and PTSD may be more likely to experience treatment disruption. Following disasters, particular attention should be given to ensuring continued treatment access for youth with pre-existing anxiety and OCRDs (as well as other conditions). 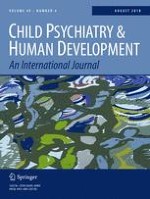 The Reactive–Proactive Aggression Questionnaire: Measurement Invariance and Reliability Among a School Sample of Portuguese Youths

Emotional and Behavioral Problems in Children and Adolescents in Central Kenya

Should Clinicians Split or Lump Psychiatric Symptoms? The Structure of Psychopathology in Two Large Pediatric Clinical Samples from England and Norway