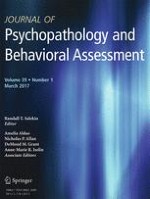 Is Distraction an Adaptive or Maladaptive Strategy for Emotion Regulation? A Person-Oriented Approach

Social Skills Mediate the Association of ADHD and Depression in Preadolescents