Prevalence of developmental disorders (DDs) has been increasing worldwide. This study identifies a trend in their prevalence and incidence, using nationwide population-based data to analyze the characteristics of children with DDs in Korea. The prevalence of DDs steadily increased by more than four times (from 0.6 to 2.5) from 2003 to 2017. Boys had higher incidence than girls throughout the period, during which the gap increased from 19.1 to 31.4%. The incidence also increased by the size of city and medical insurance quartile. The ratio of autism spectrum disorder, developmental delay and language disorders among the total incident cases of DDs increased by 13.7%, 817.6%, and 30.7%, respectively, indicating their contribution to the trend of increasing prevalence.
vorige artikel Animal Assisted Therapy for Children and Adolescents with Autism Spectrum Disorder: Parent perspectives
volgende artikel Correction to: Prevalence and Incidence of Developmental Disorders in Korea: A Nationwide Population‑Based Study 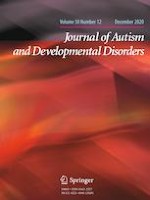 Correction to: Exploring Social Biomarkers in High‑Functioning Adults with Autism and Asperger’s Versus Healthy Controls: A Cross‑Sectional Analysis

“For Me, the Anorexia is Just a Symptom, and the Cause is the Autism”: Investigating Restrictive Eating Disorders in Autistic Women

Exploring Social Biomarkers in High-Functioning Adults with Autism and Asperger’s Versus Healthy Controls: A Cross-Sectional Analysis