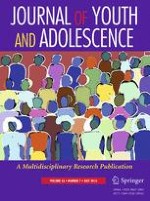 Wanting to See People Like Me? Racial and Gender Diversity in Popular Adolescent Television