Parentification, along with parenting and child adjustment, were examined in 23 9-through 16-year-old youth from families affected by maternal HIV infection and 20 same-age peers whose mothers were not infected. Children whose mothers were HIV-positive reported to more often engage in parental role behaviors, relative to children of HIV-negative mothers. This difference remained even after controlling for the effects of current drug use, number of adults per child in the household, and marital status. Findings revealed a beneficial relationship between parentification and both child adjustment and parenting, particularly among families affected by maternal HIV infection. When relationships were examined separately by HIV status, the pattern of results suggested that parentification, which involves increased emotional closeness, rather than role-related tasks, which may involve increased responsibility of household maintenance, seems to foster an association with concurrent positive parenting and child adjustment among families coping with HIV/AIDS. Directions for future research, including the need for methodological advances in the field are discussed. 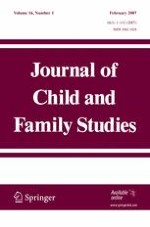 Maternal and Paternal Parenting Styles in Adolescents: Associations with Self-Esteem, Depression and Life-Satisfaction

Maternal and Paternal Perceptions of Social Competence in Children and Adolescents