In order to better understand why some children retaliate when they feel provoked and others do not, the present study identified “pacifistically-oriented” children who made negative interpretations in response to unambiguous provocations, yet did not endorse revenge goals, and compared them to “revenge-seeking” children who also made negative interpretations but did endorse revenge goals. Groups were identified based on seventh graders’ (N = 367; 54.77% male; 22.89% racial/ethnic minority) responses to hypothetical situations in which a peer excluded and insulted them. Comparing these groups revealed that Pacifists endorsed relationship-maintaining goals and emotion regulation goals more highly than Revenge-Seekers. Revenge-Seekers reported more anger and endorsed beliefs about negative reciprocity and aggression being legitimate more highly than Pacifists. Additionally, Revenge-Seekers were more disrespect sensitive than were Pacifists, based on a measure of vigilance for signs of disrespect and expectations that others would disrespect them. Together these findings point to social-cognitive and emotion-related processes that may inhibit revenge-seeking in unambiguous provocation situations, even when children interpret the peer’s behavior quite negatively.
vorige artikel Social Costs for Wannabes: Moderating Effects of Popularity and Gender on the Links between Popularity Goals and Negative Peer Experiences
volgende artikel Defending Victims of Bullying in Early Adolescence: A Multilevel Analysis 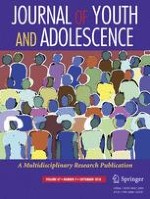 Social Costs for Wannabes: Moderating Effects of Popularity and Gender on the Links between Popularity Goals and Negative Peer Experiences

How to Attain a Popularity Goal? Examining the Mediation Effects of Popularity Determinants and Behaviors