Children with autism spectrum disorder (ASD) exhibit social-communicative impairments. Less is known about the neuropsychological profile of ASD, although cognitive and neuropsychological deficits are evident. We modelled neuropsychological function in 20 children with ASD and 20 sex, age and IQ matched typically-developing controls (ages 7–14) as a network of interacting parameters. Graph theoretical analysis was applied to identify critical topographic regions within this network. Two areas were significantly stronger hubs in typically-developing children, the ability to shift attention (p < 0.001) and overall executive function (p < 0.001). Planning/organization was a stronger hub in the cognitive networks of children with ASD (p = 0.001). We show that ASD is not only characterized by impairments in various neurocognitive domains, but also alterations in their interaction. 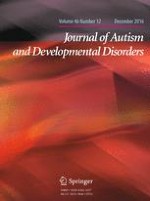 Reputation Management in Children on the Autism Spectrum

Sensory Responsiveness in Siblings of Children with Autism Spectrum Disorders