Little is known about early language development in infants who later develop autism spectrum disorder (ASD). We analyzed prospective data from 346 infants, some of whom were at high risk for developing ASD, to determine if language differences could be detected at 12 months of age in the infants who later were diagnosed with ASD. Analyses revealed lower receptive and expressive language scores in infants who later were diagnosed with ASD. Controlling for overall ability to understand and produce single words, a Rasch analysis indicated that infants who later developed ASD had a higher degree of statistically unexpected word understanding and production. At 12 months of age, quantitative and qualitative language patterns distinguished infants who later developed ASD from those who did not.
vorige artikel Metacognitive Awareness of Facial Affect in Higher-Functioning Children and Adolescents with Autism Spectrum Disorder
volgende artikel Health Services Utilization Among Children With and Without Autism Spectrum Disorders 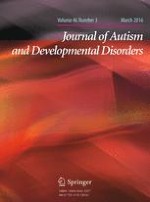 An Analysis of State Autism Educational Assessment Practices and Requirements