The online version of this article (doi:10.​1007/​s00426-017-0905-3) contains supplementary material, which is available to authorized users.
The ​original ​version ​of ​this ​article ​was ​revised: The second author name was incorrectly tagged as "Anders Ericsson. K" in the article and in the correction and it has been corrected.
This research was in part supported by the FSCW/Conradi Endowment Fund of Florida State University Foundation, awarded to K. Anders Ericsson.
A correction to this article is available online at https://​doi.​org/​10.​1007/​s00426-018-1049-9.

In two studies, the SCRABBLE skill of male and female participants at the National SCRABBLE Championship was analyzed and revealed superior performance for males. By collecting increasingly detailed information about the participants’ engagement in practice-related activities, we found that over half of the variance in SCRABBLE performance was accounted for by measures of starting ages and the amount of different types of practice activities. Males and females did not differ significantly in the benefits to their performance derived from engagement in SCRABBLE-specific practice alone (purposeful practice). However, gender differences in performance were fully mediated by lower engagement in purposeful practice by females and by their rated preference for playing games of SCRABBLE—an activity where more extended engagement is not associated with increased SCRABBLE performance. General implications from our account of gender differences in skill acquisition are discussed, and future research is proposed for how the duration of engagement in effective deliberate practice can be experimentally manipulated. 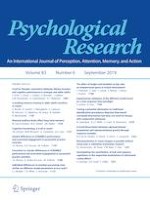 Cognitive functioning: is it all or none?

Individual differences in emotion processing: how similar are diffusion model parameters across tasks?

Reinterpretation in visual imagery is possible without visual cues: a validation of previous research