Everything has Its Time: Narrow Temporal Windows are Associated with High Levels of Autistic Traits Via Weaknesses in Multisensory Integration | mijn-bsl Skip to main content
TOOLBAR 1 2 3 4
ZOEKEN MENU 1 2 3 4

The present study examined whether fundamental sensory functions such as temporal processing and multisensory integration are related to autistic traits in the general population. Both a narrower temporal window (TW) for simultaneous perception, as measured by a temporal order judgement task, and a reduced ability to engage in multisensory integration during the sound-induced flash illusion task were related to higher levels of autistic traits. Additionally, a narrow TW is associated with high levels of autistic traits due to a deficiency in multisensory integration. Taken together, these findings suggest that alterations in fundamental functions produce a cascading effect on higher-order social and cognitive functions, such as those experienced by people with autism spectrum disorder. 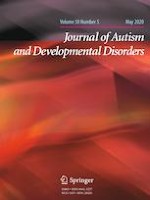 Brief Report: Do You See What I See? The Perception of Bullying in Male Adolescents with Autism Spectrum Disorder

Eating Problems in Men and Women with an Autism Spectrum Disorder