Autism spectrum disorders (ASD) and attention deficit hyperactivity disorders (ADHD) are both associated with deficits in executive control and with problems in social contexts. This study analyses the variables inhibitory control and theory of mind (ToM), including a developmental aspect in the case of the latter, to differentiate between the disorders. Participants with an ASD (N = 86), an ADHD (N = 84) and with both disorders (N = 52) in the age range of 5–22 years were compared. Results were differences in inhibitory control (ADHD < ASD) and in the ToM performance among younger (ASD < ADHD) but not among older children. We discuss whether common deficits in ToM differ in the developmental course. 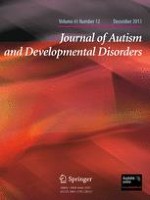 The Nature of Covariation Between Autistic Traits and Clumsiness: A Twin Study in a General Population Sample