This study aimed to: (1) examine the relationship between depressive symptoms and subclinical atherosclerosis, measured by carotid intima–media thickness (IMT); and, (2) Determine the moderating effect of gender in this relationship among South American Hispanics. We studied 496 adults enrolled in the population-based PREVENCION study. Carotid IMT was measured with high-resolution ultrasonography. Depressive symptoms were assessed using the Hospital Anxiety and Depression Scale. Mean carotid IMT was 0.66 mm. (SD = 0.17) and mean depression score was 5.6 (SD = 3.5). Depressive symptoms were not associated with carotid IMT (β = 0.04, p = 0.222) in multivariate analyses. A significant moderating effect of gender was found (β for interaction = 0.10, p = 0.030), resulting from a significant association between depressive symptoms and carotid IMT in men but not women. Depressive symptoms were associated with subclinical atherosclerosis in South American Hispanic men but not women after controlling for demographic characteristics and traditional cardiovascular risk factors.
vorige artikel The placebo effect, sleep difficulty, and side effects: a balanced placebo model
volgende artikel A meta-analysis of the relationship between social constraints and distress in cancer patients 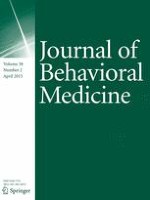 Shared versus specific features of psychological symptoms and cigarettes per day: structural relations and mediation by negative- and positive-reinforcement smoking

Can behavioral theory inform the understanding of depression and medication nonadherence among HIV-positive substance users?

The association between mindfulness and emotional distress in adults with diabetes: Could mindfulness serve as a buffer? Results from Diabetes MILES: The Netherlands

How risky is it to use e-cigarettes? Smokers’ beliefs about their health risks from using novel and traditional tobacco products