The Child Behavior Checklist-Dysregulation Profile has been utilized as a potential predictive measure of future psychopathology among children and adolescents. Previous studies have examined the differences between individuals with and without an elevated profile on variables such as parenting, temperament, parental psychopathology, personality, and more. The current study extended the literature to examine similar variables among an emerging adult population as well as gender differences among the profile groups determined from a parallel form of the Child Behavior Checklist for adults, the Adult Self Report. Emerging adults were recruited at a large Southern university in the United States (410 females and 189 males). A latent profile analysis was conducted to determine profile group membership (i.e., elevation of dysregulation) and differences were examined on temperament, parental and emerging adult psychopathology, parent-child relationship, and discipline and harsh parenting. Significant differences were demonstrated between the elevated dysregulated profile and the group with low dysregulation on all observed variables. Analyses of gender differences indicated that males with an elevated dysregulation profile may be particularly vulnerable on several variables.
vorige artikel Evaluation of the Self-Report Inventory of Callous-Unemotional Traits in a Sample of Urban Middle School Students: a Multidimensional Rasch Analysis
volgende artikel Internal and External Validity of Self-Report and Parent-Report Measures of Sluggish Cognitive Tempo in South Korean Adolescents 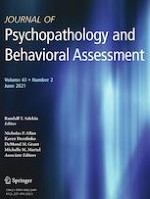 Testing the Metacognitive Model of Rumination and Depression in Non-clinical Population: New Data about PBRS and NBRS Scales