Exposure to intimate partner violence (IPV) in the family context has detrimental effects for children’s physical health and psychological adjustment. The current study examined the direct links between IPV and children’s externalizing and internalizing behavior problems and the indirect effect of coparenting quality as reported by a sample of 79 (80% African American, 11% Latina, and 9% Multiracial/Other), low-income mothers of children aged 2–12 years, the majority of whom were not in a romantic relationship (61%) or cohabitating with their child’s biological father (64%). Results indicated that IPV history was directly associated with higher rates of internalizing behaviors, but not with externalizing behaviors. Coparenting quality mediated the association between IPV and child externalizing and internalizing behaviors, when controlling for parent relationship status, such that IPV history was associated with lower levels of coparenting quality, which was associated with higher rates of child behavior problems. Findings highlight the importance of culturally appropriate self-report measures of coparenting and implications of IPV in racially and ethnically diverse low-income families on child adjustment.
vorige artikel Job Insecurity and Depressive Symptoms in Mothers and Adolescents: A Dyadic Study
volgende artikel Parenting Stress, Parenting, and Adolescent Externalizing Problems 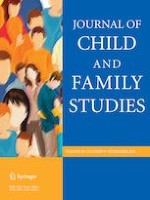 The Self-efficacy for Parenting Adolescents Scale: Development and Initial Validation

Job Insecurity and Depressive Symptoms in Mothers and Adolescents: A Dyadic Study

Parenting Surviving Children After the Death of a Child from Cancer: An Interpretative Phenomenological Analysis