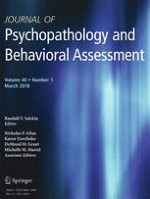 Investigating the Components of Psychopathic Traits in Youth Offenders

The Multidimensional Nature of Psychopathy: Five Recommendations for Research

Psychopathic Personality Traits in Relation to Self-report Delinquency in Adolescence: Should We Mind About Interaction Effects?