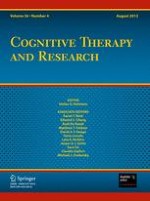 Responding to Anxiety with Rumination and Hopelessness: Mechanism of Anxiety-Depression Symptom Co-Occurrence?

Changes in Judgment Biases and Use of Emotion Regulation Strategies During Cognitive-Behavioral Therapy for Social Anxiety Disorder: Distinguishing Treatment Responders from Nonresponders

The Nature of Threat: Enhanced Recall of Internal Threat Words in Fear of Flying

The Future of Cognitive Therapy and Research is Bright and Clear