Children with autism spectrum disorders have been reported to be less influenced by a speaker’s face during speech perception than those with typically development. To more closely examine these reported differences, a novel visual phonemic restoration paradigm was used to assess neural signatures (event-related potentials [ERPs]) of audiovisual processing in typically developing children and in children with autism spectrum disorder. Video of a speaker saying the syllable /ba/ was paired with (1) a synthesized /ba/ or (2) a synthesized syllable derived from /ba/ in which auditory cues for the consonant were substantially weakened, thereby sounding more like /a/. The auditory stimuli are easily discriminable; however, in the context of a visual /ba/, the auditory /a/ is typically perceived as /ba/, producing a visual phonemic restoration. Only children with ASD showed a large /ba/-/a/ discrimination response in the presence of a speaker producing /ba/, suggesting reduced influence of visual speech.
vorige artikel Effects of X Chromosome Monosomy and Genomic Imprinting on Observational Markers of Social Anxiety in Prepubertal Girls with Turner Syndrome
volgende artikel Community Led Co-Design of a Social Networking Platform with Adolescents with Autism Spectrum Disorder 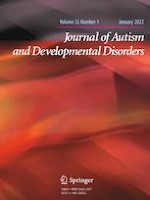 A Systematic Review: Acceptance and Commitment Therapy for the Parents of Children and Adolescents with Autism Spectrum Disorder

Peer Experiences of Military Spouses with Children with Autism in a Distance Peer Mentoring Program: A Pilot Study

Brief Report: Role of Parent-Reported Executive Functioning and Anxiety in Insistence on Sameness in Individuals with Germline PTEN Mutations