Research has shown that yoga may be an effective adjunctive treatment for persistent depression, the benefits of which may accumulate over time. The objectives of this study were to evaluate the following in a sample of persistently depressed individuals: whether yoga increases mindfulness and whether yoga attenuates rumination. Rumination and mindfulness both represent attentional processes relevant for onset and maintenance of depressive episodes.

One-hundred-ten individuals who were persistently depressed despite ongoing use of pharmacological treatment were recruited into an RCT comparing yoga with a health education class. Mindfulness and rumination were assessed at baseline and across 3 time points during the 10-week intervention.

Findings demonstrate that, compared to health education, yoga was associated with higher mean levels of the observe facet of mindfulness relative to the control group during the intervention period (p = 0.004, d = 0.38), and that yoga was associated with a faster rate of increase in levels of acting with awareness over the intervention period (p = 0.03, f2 = 0.027). There were no differences between intervention groups with respect to rumination.

Results suggest a small effect of yoga on components of mindfulness during a 10-week intervention period. Previous research suggests that continued assessment after the initial 10 weeks may reveal continued improvement. Future research may also examine moderators of the impact of yoga on mindfulness and rumination, including clinical factors such as depression severity or depression chronicity, or demographic factors such as age.
vorige artikel Overcoming Fear by Recollecting the Buddha: His Role in Early Buddhist Texts
volgende artikel Applying Generalizability Theory to Differentiate Between Trait and State in the Interpersonal Mindfulness Scale (IMS) 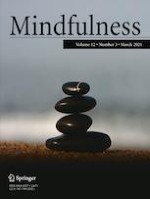 Embracing the Intricacies of the Path Toward Mindfulness: Broadening Our Conceptualization of the Process of Cultivating Mindfulness in Day-to-Day Life by Developing the Unified Flexibility and Mindfulness Model

Mindfulness as Attention Training: Meta-Analyses on the Links Between Attention Performance and Mindfulness Interventions, Long-Term Meditation Practice, and Trait Mindfulness