Williams Syndrome (WS) is described as displaying a dissociation within memory systems. As the integrity of hippocampal formation (HF) is determinant for memory performance, we examined HF volumes and its association with memory measures in a group of WS and in a typically development group. A significantly reduced intracranial content was found in WS, despite no differences were observed for HF absolute volumes between groups. When volumes were normalized, left HF was increased in WS. Moreover, a lack of the normal right > left HF asymmetry was observed in WS. No positive correlations were found between volumetric and neurocognitive data in WS. In sum, a relative enlargement of HF and atypical patterns of asymmetry suggest abnormal brain development in WS.
vorige artikel Affective Modulation of the Startle Eyeblink and Postauricular Reflexes in Autism Spectrum Disorder
volgende artikel Assessing Recollection and Familiarity in Autistic Spectrum Disorders: Methods and Findings 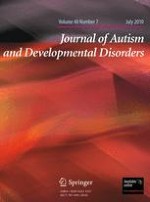