Who is Likely to Help and Hurt? Profiles of African American Adolescents with Prosocial and Aggressive Behavior | mijn-bsl Skip to main content
TOOLBAR 1 2 3 4
ZOEKEN MENU 1 2 3 4

Prosocial behavior and aggression among children and adolescents are important indicators of social and interpersonal competence. The goal of this study was to investigate whether there are different prototypes among African American adolescents that can help explain prosocial and aggressive (relational and overt) behaviors. Also of interest was whether these profiles differed for boys and girls. The selection of independent variables (e.g., empathy, anger management, normative beliefs about aggression, and ethnic identity) was guided by an information processing model of aggression and prosocial behaviors. The sample consisted of 789 (57% female) African American adolescents between the ages of 11 and 14. Cluster analysis produced three profiles that were similar for boys and girls. These were labeled “well-adjusted,” “poorly adjusted,” and “low identity.” A fourth profile was labeled “low empathy” for girls and “poor anger management” for boys. These four clusters significantly differentiated who engaged in prosocial behavior and relational and overt aggression. Findings suggest that prevention programs may consider targeting well-adjusted youth to serve as peer modes. Additionally, programs that promote empathy, anger management, ethnic identity, and normative beliefs against aggression may be useful for reducing aggression and increasing prosocial behavior among poorly adjusted youth. 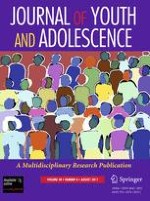 Dimensions of Adolescent Psychopathology and Relationships to Suicide Risk Indicators

Frank C. DiCataldo: The Perversion of Youth: Controversies in the Assessment and Treatment of Juvenile Sex Offenders