Confirmatory factor analyses were conducted of Diagnostic and Statistical Manual of Mental Disorders, Fourth Edition (DSM-IV) symptoms of common mental disorders derived from structured interviews of a representative sample of 4,049 twin children and adolescents and their adult caretakers. A dimensional model based on the assignment of symptoms to syndromes in DSM-IV fit better than alternative models, but some dimensions were highly correlated. Modest sex and age differences in factor loadings and correlations were found that suggest that the dimensions of psychopathology are stable across sex and age, but slightly more differentiated at older ages and in males. The dimensions of symptoms were found to be hierarchically organized within higher-order “externalizing” and “internalizing” dimensions, which accounted for much of their variance. Major depression and generalized anxiety disorder were substantially correlated with both the “externalizing” dimension and the “internalizing” dimension, however, suggesting the need to reconceptualize the nature of these higher-order dimensions.
vorige artikel Violent Victimization in the Community and Children’s Subsequent Peer Rejection: The Mediating Role of Emotion Dysregulation
volgende artikel Children’s Affect Expression and Frontal EEG Asymmetry: Transactional Associations with Mothers’ Depressive Symptoms 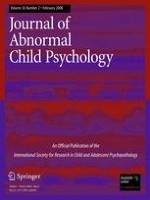 Adolescent Self-Regulation as Resilience: Resistance to Antisocial Behavior within the Deviant Peer Context