The online version of this article (doi:10.​1007/​s10803-014-2253-0) contains supplementary material, which is available to authorized users.
The findings and conclusions in this report are those of the author(s) and do not necessarily represent the official position of the Centers for Disease Control and Prevention or the National Institutes of Health.

Heightened areas of spatial relative risk for autism spectrum disorders (ASD), or ASD hotspots, in Utah were identified using adaptive kernel density functions. Children ages four, six, and eight with ASD from multiple birth cohorts were identified by the Utah Registry of Autism and Developmental Disabilities. Each ASD case was gender-matched to 20 birth cohort controls. Demographic and socioeconomic characteristics of children born inside versus outside ASD hotspots were compared. ASD hotspots were found in the surveillance area for all but one birth cohort and age group sample; maximum relative risk in these hotspots ranged from 1.8 to 3.0. Associations were found between higher socioeconomic status and birth residence in an ASD hotspot in five out of six birth cohort and age group samples. 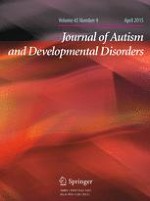 Response to the Letter to the Editor: Impacts of Autistic Behaviors, Emotional and Behavioral Problems on Parenting Stress in Caregivers of Children with Autism: Errors and Discrepancies

Informant Agreement for Youth with Autism Spectrum Disorder or Intellectual Disability: A Meta-analysis

Parenting Stress, Salivary Biomarkers, and Ambulatory Blood Pressure: A Comparison Between Mothers and Fathers of Children with Autism Spectrum Disorders

The Interplay Between Sensory Processing Abnormalities, Intolerance of Uncertainty, Anxiety and Restricted and Repetitive Behaviours in Autism Spectrum Disorder