The purpose of this study was to investigate the factorial structure and psychometric properties of the Spence Children’s Anxiety Scale (SCAS) in a sample of 1,708 Spanish children aged between 8 and 12 years. The SCAS was demonstrated to have satisfactory internal consistency with the Spanish sample, and factor analysis confirmed the six-factor original model. Convergent validity was supported by correlations with the State-Trait Anxiety Inventory for Children and the welfare dimension of the Child Health and Illness Profile-Children Edition. Low correlations between the SCAS and the Children’s Depression Inventory supported the divergent validity. Analysis suggested that anxiety scores decrease with age, and girls reported higher scores than boys. Overall, the SCAS was shown to have good psychometric properties for use with Spanish children by clinicians and researchers. 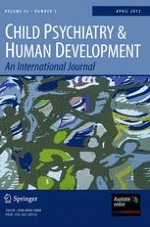 Self Representation in Children With and Without Autism Spectrum Disorders

Genetic Risks and ADHD Symptomatology: Exploring the Effects of Parental Antisocial Behaviors in an Adoption-Based Study

Reinforcement Sensitivity and Risk for Psychopathology Following Exposure to Violence: A Vulnerability-Specificity Model in Latino Youth