To determine whether self-reported symptoms of depression are differentiated by changes in sleeping patterns or appetite, the Beck Depression Inventory-II (BDI-II; Beck et al. 1996) was administered to 1,250 outpatients diagnosed with a major depressive disorder. A series of focused contrasts supported the hypothesis that the mean BDI-II total scores and the majority of the symptom ratings of the outpatients who described increases or decreases in their sleeping patterns or appetites were comparable and higher than the mean BDI-II total scores and symptom ratings of the patients who reported no changes in their sleeping patterns or appetites. However, the patients who were sleeping less described themselves as being more agitated than those who were sleeping more. Decreases and increases in sleep or appetite were both discussed as indicating comparable levels of depressive symptomatology. 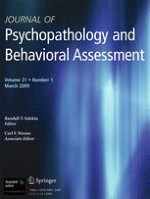 Reactive and Proactive Aggression: Cross-informant Agreement and the Clinical Utility of Different Informants

Debiasing of Pessimistic Judgments Associated with Anxiety: A Test of the Availability Heuristic

Psychopathology and Assessment: Contributing Knowledge to Science and Practice