The visual system has to distinguish between information that is relevant and irrelevant for current behavioral goals. This is especially important in automatized responses. Here, we study how task-irrelevant distractors with task-relevant features gain access to speeded, automatized motor responses in a response-priming paradigm. In two tasks, we present distractors either together with primes or with targets, and vary the consistency between primes/targets and distractors as well as the number and saturation of distractors. Our findings are consistent with accounts where primes, targets, and distractors contribute to response activations by sequential feedforward response activation. In addition, conditions with especially salient target–distractors seem to lead to active inhibition of the primed response that occurs late in the trial. We replicate all main findings in a control experiment. Together, our findings show that the effects of distractors depend on (i) their stimulus characteristics as well as on (ii) the phase at which they enter visual processing—with effects ranging from feedforward activation to controlled inhibition of responses.
vorige artikel Peripersonal space in social context is modulated by action reward, but differently in males and females
volgende artikel At what stage in the drinking process does drinking water affect attention and memory? Effects of mouth rinsing and mouth drying in adults 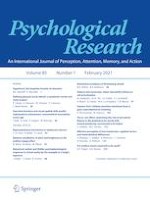 Mood state and conflict adaptation: an update and a diffusion model analysis

Screen size matches of familiar images are biased by canonical size, rather than showing a memory size effect