This study examined the relationship between sensory deficits and externalizing behavior problems in preschool children. Parents of 179 urban, Latino preschool children completed two parent-report measures, the Short Sensory Profile (SSP), as a checklist for sensory symptoms, and the Achenbach Checklist for Ages 1½–5 (CBCL/1½–5) to assess externalizing behavior problems. Measures were available in Spanish or English depending on the parent’s preference. Correlations were performed between the total sensory deficits scale of the SSP and the Oppositional Defiant Disorder, Attention Deficit Hyperactivity Disorder, and Externalizing Problems scales of the CBCL. Significant correlations were found between increasing levels of sensory deficits and increasing externalizing behavior problems. Correlations were also examined in subcategories of age, gender and socioeconomic status. Five-year-old children showed stronger correlations than 4-year-old children, while males showed stronger correlations than females, and the highest correlations were found in children of families reporting between $18,001 and $24,000 per year annual income. Findings suggest that Latino preschool children with externalizing behavior problems may suffer from delays in sensory development that impact their behavior. Clinical interventions should promote strategies that either reduce or increase environmental stimuli in accordance with the sensory abilities of the individual child.
vorige artikel The Relationship between Parental Efficacy and Depressive Symptoms in a Diverse Sample of Low Income Mothers
volgende artikel What Does it Mean to be Autistic? Inter-state Variation in Special Education Criteria for Autism Services 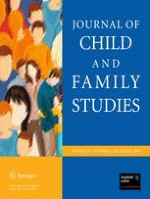 What Does it Mean to be Autistic? Inter-state Variation in Special Education Criteria for Autism Services

Neighborhood Risk, Parental Supervision and the Onset of Substance Use among African American Adolescents

Gale Holtz Golden: In the Grip of Desire: A Therapist at Work with Sexual Secrets