Since autism spectrum disorder (ASD) is often comorbid with psychiatric disorders, children who no longer meet criteria for ASD (optimal outcome; OO) may still be at risk for psychiatric disorders. A parent interview for DSM-IV psychiatric disorders (K-SADS-PL) for 33 OO, 42 high-functioning autism (HFA) and 34 typically developing (TD) youth, ages 8–21, showed that OO and HFA groups had elevated current ADHD and specific phobias, with tics in HFA. In the past, the HFA group also had elevated depression and ODD, and the OO group had tics. The HFA group also showed subthreshold symptoms of specific and social phobias, and generalized anxiety. Psychopathology in the OO group abated over time as did their autism, and decreased more than in HFA. 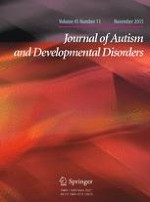 Strange Words: Autistic Traits and the Processing of Non-Literal Language