Men with prostate cancer (PC) may show specific disease-related anxiety. We evaluated the psychometric properties of the Dutch adaptation of the Memorial Anxiety Scale for Prostate Cancer (MAX-PC).

Data from 129 respondents were used (response rate 86%). Cronbach’s alpha for the total score and the three subscales were 0.77, 0.91, 0.64, and 0.85, respectively. CFA largely confirmed the three-factor structure as used in the original publication (model fit: χ2 149, P = 0.051). The patterns of directions and sizes of the correlations (r = 0.36–0.66) between MAX-PC scale scores and the other variables were in accordance with a priori hypotheses, except for the prostate-specific antigen anxiety subscale. The relatively poor performance of this scale in the original version was replicated.

The structure and validity of the MAX-PC to quantify PC-specific anxiety were largely confirmed in Dutch patients. 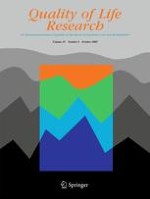 Impact of mental disorders and chronic physical conditions in health-related quality of life among primary care patients: results from an epidemiological study

The complexity of the relationship between chronic pain and quality of life: a study of the general Norwegian population