To evaluate the validity and reliability of a newly-translated Thyroid-specific Patient-Reported Outcome short-form (ThyPRO-39) instrument for ethnic-Chinese patients suffering from benign thyroid diseases.

The translation and cross-cultural adaptation of the English ThyPRO-39 were performed using the double forward translation, reconciliation, single backward translation, and cognitive debriefing, followed by a panel review. Cross-sectional data of 308 patients with benign thyroid diseases were utilized for this psychometric evaluation of ThyPRO-39 instrument. Convergent validity between similar construct in the ThyPRO-39, SF-6D, and SF-12v2 was assessed using Spearman correlations. The internal construct validity was assessed by corrected item-total correlations. Sensitivity of the ThyPRO-39 domain scores was determined by performing known group comparisons by independent t test. The internal consistency reliability was assessed by Cronbach’s alpha coefficient.

Significant floor effects were observed in 9 out of 13 domains of the ThyPRO-39. The hypothesized correlations between similar constructs in the ThyPRO-39 and the SF-12v2 and SF-6D were generally observed, supporting convergent validity. The internal construct validity was supported in most items, except eight items in six scales. Scale score of hyperthyroid symptoms of the ThyPRO-39 was significantly higher in the group with Graves’ disease or hyperthyroid disease than the group without Graves’ disease nor hyperthyroid disease. Scale scores of eye symptoms and impaired daily life were significantly higher in the incidental group than the non-incidental group. For six domains (hyperthyroid symptoms, hypothyroid symptoms, eye symptoms, tiredness, depressivity, and emotional susceptibility), Cronbach’s alpha did not reach the recommended standard of 0.7.

This was the first psychometric study to translate and adapt the ThyPRO-39 instrument for non-Caucasian patients, and report its validity and reliability for use in Chinese patients with benign thyroid diseases. Given the low item-total correlations in eight items and low internal consistency reliability in respective scales of the ThyPRO-39, we suggest that the improvement of those eight items should produce a more valid and reliable ThyPRO-39 instrument. 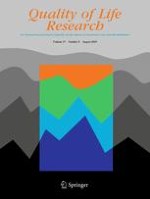 A systematic review of Indigenous caregiver functioning and interventions

Directionality of the relationship between social well-being and subjective well-being: evidence from a 20-year longitudinal study

Quality of life in older adults with sensory impairments: a systematic review

Change in functioning outcomes as a predictor of the course of depression: a 12-month longitudinal study