Sibling relational aggression is an important but understudied dimension of sibling relationships that has potential implications for adolescents’ adjustment. This study examined the longitudinal associations between being the target of sibling relational aggression and adolescent adjustment (i.e., depressive symptoms, risky behavior, self-worth, and romantic competence) among younger and older siblings over a three-year period in adolescence. The moderating roles of birth order, sibling gender, and sibling dyad gender constellation also were tested. Participants were 196 European American adolescent (firstborn-secondborn) sibling pairs who were 16.47 years (SD = 0.80) and 13.88 years (SD = 1.15) of age, respectively, at the onset of this study. Data were collected separately from each sibling during home interviews. Multilevel models revealed that being the target of sibling relational aggression was associated with all four adjustment outcomes at the between-person level, and with risky behavior and romantic competence at the within-person level. However, some of these effects were moderated by sibling dyad characteristics. Although often overlooked in the literature on adolescence, sibling relationship dynamics play a key role in youth development and adjustment. 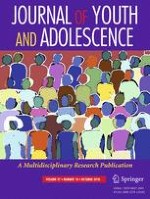 More Than Just Keeping Busy: The Protective Effects of Organized Activity Participation on Violence and Substance Use Among Urban Youth