Academic difficulties are well-documented among children with ADHD. Exploring these difficulties through story comprehension research has revealed deficits among children with ADHD in making causal connections between events and in using causal structure and thematic importance to guide recall of stories. Important to theories of story comprehension and implied in these deficits is the ability to make inferences. Often, characters’ goals are implicit and explanations of events must be inferred. The purpose of the present study was to compare the inferences generated during story comprehension by 23 7– to 11-year-old children with ADHD (16 males) and 35 comparison peers (19 males). Children watched two televised stories, each paused at five points. In the experimental condition, at each pause children told what they were thinking about the story, whereas in the control condition no responses were made during pauses. After viewing, children recalled the story. Several types of inferences and inference plausibility were coded. Children with ADHD generated fewer of the most essential inferences, plausible explanatory inferences, than did comparison children, both during story processing and during story recall. The groups did not differ on production of other types of inferences. Group differences in generating inferences during the think-aloud task significantly mediated group differences in patterns of recall. Both groups recalled more of the most important story information after completing the think-aloud task. Generating fewer explanatory inferences has important implications for story comprehension deficits in children with ADHD.
vorige artikel Improving Teacher-Child Relationship Quality and Teacher-Rated Behavioral Adjustment Amongst Externalizing Preschoolers: Effects of a Two-Component Intervention
volgende artikel Moderators of Neuropsychological Mechanism in Attention-Deficit Hyperactivity Disorder 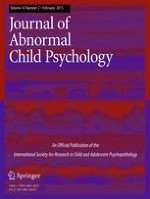 Developmental Trajectories of Anxiety and Depression in Early Adolescence

The Role of Parent, Teacher, and Peer Events in Maintaining Depressive Symptoms during Early Adolescence